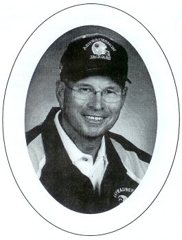 Ed was born in Wisconsin Rapids and raised in Nekoosa, where he graduated from Alexander High in 1963, having earned 13 varsity letters in football, basketball, and baseball.

He continued his baseball and football careers at UW­Eau Claire, where as a running back and defensive back, he played on the undefeated 1963 Blugold Conference Championship team. In 1964 while recovering from back surgery, Ed was relegated to the scouting booth, planting the seeds for his coaching career. Although he returned to the Blugolds in '65 and '66, a knee injury ended his play­ing career. Krcmar's 41-year coaching career began with one year as a grad assistant at UW-Eau Claire, followed by two years as an assistant at Eau Claire North, one year as a grad assistant at UW-LaCrosse, and two years as the head coach at Grantsburg, finishing 9-6-1 .

In 1973 Ed moved to Ashwaubenon, where he served as head coach for 10 years, compiling a 51-39 record and winning a conference title in 1979. He stepped down in 1983 but remained on new coach Ken Golomski's staff. During his 25-year Jaguar assistantship, Krcmar was defensive coordinator (6 years), offensive coordinator (17 years), and passing game coordinator (2 years). In the last 19 years, the Jaguars enjoyed seven conference championships, 52 playoff appearances, two State Runner-up trophies ('93 and '98) and four State Championships ('96, '00, '01, '05). In 2001 he was named WFCA District IV Assistant Football Coach of the Year.

Ed holds a bachelor's degree in mathematics from UW-Eau Claire and master's in physical education from UW-LaCrosse. He taught math and physical education dur­ing his 34 year career and was voted Ashwaubenon High School Teacher of the Year by his peers in 1989.

Krcmar coached baseball for 36 years, 31 at Ashwaubenon with 25 as Jaguar head coach. He held numerous positions in the Wisconsin Baseball Coaches Association, including president, and was inducted into the WBCA Hall of Fame in 1996. In addition, he has coached boys golf, downhill skiing, girls softball, and youth basketball.

He is extremely grateful to the Ashwaubenon community, school staff, players and their parents, Coach Golomski, and all the assistant coaches he has worked with throughout the years for their loyalty and support.