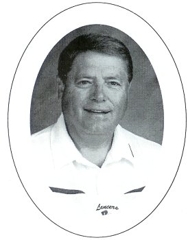 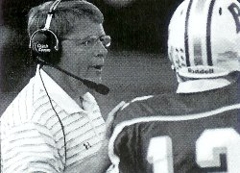 Doug was raised in New Berlin, Wisconsin, by his parents Lee and lone Lange with his sister Barb and brother Bruce. He graduated from "The"
New Berlin High School in 1967 and competed and lettered in football, basketball and baseball.

After helping out with "Viking" football under Buck Brunkhorst there was little doubt that football would become a passion for Doug for the rest of his life. He attended Oshkosh University working with the late Pat O'Halloran, and then transferred to Whitewater, where he graduated in 1971 with an English degree, which he is still using today, 35 years later.

Coach Lange started his teacher career at Glen Park Middle School in New Berlin and started coaching at his alma mater, now known as New Berlin West. Doug then became the Head Baseball Coach and also worked in the basketball program. After a few seasons he moved to learn from the best and to better his craft. He coached at Catholic Memorial, then New Berlin Eisenhower before becoming the Head Coach at New Berlin High School in 1982.

Doug stayed at West for 17 years, 87 victories, and seven seasons of state playoffs, 3 conference championships and a trip to the state finals in 1988. With new challenges to be met, Doug moved to Carroll College to ultimately coordinate the defense under Merle Masonholder. In 2000, the defense led the Midwest Conference. Coach then joined the football staff at New Berlin Eisenhower for three years and finished out his teaching career in New Berlin at Eisenhower High School.

Doug's second year at Brookfield Central was an exceptional season as the Lancers went 13-1 and Coach recorded his 100th victory. Be was 21-4 in 06 and 07 and looking for better things in 2008.

The gifts for this man have been plentiful; he is thankful for his great family, his chance to teach and coach, the great young men and two sons he had the opportunity to work with, outstanding assistant coaches including his brother, Bruce, for their love of the game and is certainly forever grateful to the WFCA for this great honor.