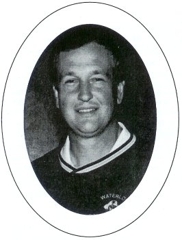 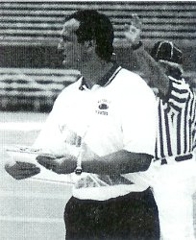 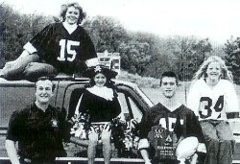 Doug is the son of Jerome and Maude Miller. He was born in Marinette, Wisconsin, on November 1, 1955, and attended Marinette High School. Doug graduated from Marinette High School in 1974, where he lettered eight times in football, basketball and track. In foot­ball, Doug was a three-year starter and was named the Team's Most Valuable Player his senior year.

After high school, Doug attended the University of Wisconsin-La Crosse, where he earned his Bachelor's Degree in physical education in 1978 and his Master's Degree in 1979. Doug spent his first two years at UW - La Crosse attempting to play quarterback after shoulder sur­gery. He is thankful that Roger Harring gave him an invi­tation to join the coaching staff at UW- La Crosse. It was during this time that Doug took advantage of a great opportunity to learn from coach Harring and the out­standing staff members at UW-La Crosse.

In the fall of 1979, Doug took his first teaching job in Clintonville, Wisconsin, where he served as assistant football coach and head track and field coach for two years. During the summer of 1981, Doug accepted the position of physical education instructor, head football coach and track coach at Waterloo High School. As the head football coach at Waterloo, Doug has a 195-79 record with 10 conference championships and two state runner -up trophies. He has had the pleasure of spending all of his first 27 years with assistant coaches Jeff Otteson and Dick Jones. Doug has received the WFCA Regionl District Coach of The Year Awards five times along with the UW-La Crosse Alumni Coach of the Year Award in 1988. He served the WFCA as a district representative for eight years.

Doug has been the boys track and field coach for 25 years, along with a dual role of being the girls coach for six years. During this time, Doug had one team state championship, three state runner-ups, 28 individual state champions, and four state record holders.