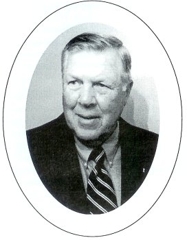 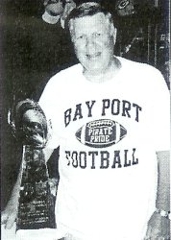 Ron began his journey on May 2,1938, in Green Bay, the son of Marie and Austin Miller. He attended Green Bay West High School where he lettered in track, basketball and football.

He also played Legion baseball and was selected to the state All-Star Legion team as a pitcher for 2 years. Football proved to be his niche, as his skill of kicker and long snapper won him a scholarship to Indiana University where he lettered for 3 years.

In 1960 he signed as a free agent for the Philadelphia Eagles only to be cut on the final cut-down day. He then went on to play pro ball in Canada, and semi-pro in Indianapolis and Manitowoc.

His coaching journey began at Indianapolis Howe where his freshmen team won the City Championship with an 8-0 record. At Indianapolis Brebeuf his varsity teams were 10-0 both years and Marion County Champions. While at Brebeuf he coached baseball and engineered the building of their baseball diamond.

In 1967 Ted Fritsch resigned as the head coach of Green Bay Premontre and with high recommendation from him and Tony Canedeo, Ron returned home to be the head coach of the Cadets until 1976. During his tenure his teams never lost more than 3 games in a season and in 1970 they went undefeated and brought home the State Championship trophy!

During these same years he continued to work for BLESTO, a professional scouting organization and was a WIAA basketball official and baseball umpire. In order to pay the bills, however, he began his own home repair and remodeling business called S.WA.T.

In 1977 Ron's former coach and teacher, Mike Miller, recruited Ron to be his offensive coordinator back at Green Bay West. Ron coached 21 seasons there, with the Wildcats winning the FRVC in 1980-1983,1994.

Deciding he needed a new knee, he retired in 1998, only to be called back in 2000. This time he would be the offensive backs coach and work under former West High coach Mike Williquette, who was now the head of Bay Port football. The Pirates have made the playoffs the last 7 years, getting to Level 4 in 2003.

Ron thanks the WFCA for bestowing this tremendous honor upon him.