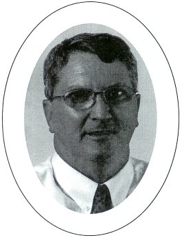 John was born to Don and Mary O'Grady on July 14, 1954. He attended Sullivan High School in Chicago, Illinois, where he participated in varsity football. He was a named a team captain and earned the coach's award and the most valuable player award in 1971. He graduated from Sullivan in 1972 and went on to attend college at UW-River Falls.

O'Grady continued his football career at UW-River Falls, earning four varsity letters, and a conference championship in 1975. He was a team captain and chosen as the most dedicated player by his 1975 teammates.

After his playing days were over, O'Grady continued to be involved in Falcon football as a student assistant from 1976-1980, including the 1976, 1979, and 1980 conference champion teams. In 1979 O'Grady earned his undergraduate degree in physical education. He com­pleted his master's degree in supervision and instructional leadership from UW-River Falls in 1983.

O'Grady enters his 20th season as head coach at UW-River Falls in 2008.  He currently stands in second place in all-time wins at UW-River Falls just behind his own head coach, Mike Farley. His teams have won a conference championship in 1998 and were in the NCAA playoffs in 1995 & 1996. They have also led the nation in rushing five times. He is a firm believer in education and maintains a 99% graduation rate among those players who have played for four years. In addition to this O'Grady is known throughout the state as a resource on the wishbone offense for countless numbers of high school coaches. He also coordinates some of the longest running high school camps in the state, hosting thousands of high school athletes and hundreds of coaches throughout Wisconsin and Minnesota.

Coach O is proud of his family, the many young men he has coached throughout his career, and would like to thank the WFCA for the support and encouragement they provide for student-athletes throughout the state.