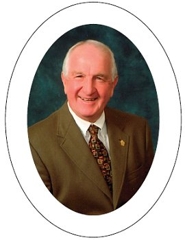 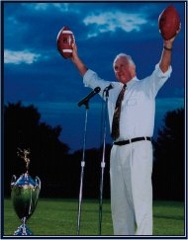 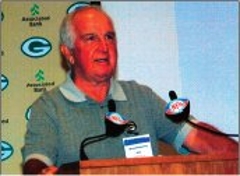 Dave McClain Distinguished Service Award Douglas E. Chickering was appointed Executive Director of the Wisconsin Interscholastic Athletic Association on January 1, 1986. He is only the WIAA’s fourth executive officer. He represented District 2 (northeast) on the Board of Control for two three-year terms (1979-85) and was president of the Board during the 1981-82 school year.

Born in Rusk County, Chickering graduated from Hawkins High School (now part of the Ladysmith District) in 1959. He received a BS degree in mathematics and physical sciences from UW-Eau Claire in 1963, then began a career in education as a teacher and coach at Gilman High School. He became principal and athletic director at the school in 1967 and he was named district administrator in 1969. He left Gilman in 1974 to become the district administrator at Marathon and held that position until he joined the WIAA. He earned aMEd. Degree from UW-Superior in 1970.

Chickering has played a role in national interscholastic activities governance. From 1990 until 1993 he served on the National Federation of State High School Associations’ governing board and during his final year was elected President. He recently completed a second term on the Federation’s Board of Directors. Other Federation responsibilities include service during three strategic planning efforts and membership on the Sportsmanship, Ethics & Integrity, Football Rules, and Risk Management Committees and a New Paradigm Task Force. He currently chairs the Federation Foundation’s Board of Directors.

Chickering received a Lifetime Excellence Award from UW-Eau Claire in 2003.  The award recognizes alumni who have demonstrated a longtime and successful commitment through service. In 2005, the Wisconsin Broadcasters Association, through a grant provided by the Oakley-Lindsey Foundation, named its Annual Sports Reporters Workshop after Chickering. It was the first WBA Foundation education program to be endowed and allows the Foundation to continue offering quality programming to sports reporters.