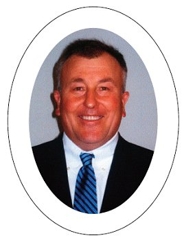 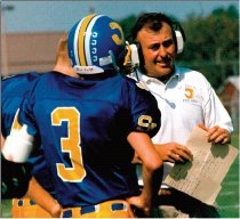 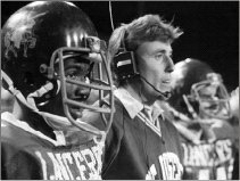 Bob was born in Fond du Lac, Wisconsin, on March 23, 1955 to Fred and Margaret Freund. He graduated from Saint Mary’s Springs High School in 1973 where he played football under coach, Bob Hyland.

Freund enrolled at the University of Wisconsin-La Crosse where he earned his Bachelor's Degree in Physical Education and Health Education.  At UW-La Crosse, he earned two varsity letters playing for head coach, Roger Harring and position coach, Barry Schockmel.

Bob began his teaching and coaching career at Saint Patrick’s Grade School in Fond du Lac and then spent a year as head football coach at Shullsburg High School. In 1981, he moved to Kenosha to become the head coach at Saint Joseph High School. In 1984, Bob led the Lancers to their first WISAA Playoff appearance and was honored as the Metro Conference Coach of the Year.

Freund began a six-year stint at Assumption High School in Wisconsin Rapids in 1987, serving as head football coach and athletic director. He was named the Central Wisconsin Catholic Conference Coach of the Year in 1990 and 1992.

The Royals advanced to the WISAA Division 3 State Championship game in 1992. Bob served as an assistant coach for the North Squad in the 1992 Shrine All-Star Game.

Bob returned to Saint Joseph High School for the 1993 season and coached through the 2004 season. During that time, the Lancers captured the 1994 WISAA Division 2 State Championship, advanced to the 2001 WIAA Division 5 semi-finals, and qualified for the State Playoffs 11 consecutive seasons. The Lancers were crowned Lakeshore Conference Champions in 1997, 2002, and 2003. Bob was recognized as the 2001 UW-La Crosse Alumni Coach of the Year, the 2002 Lakeshore Conference Coach of he Year, and the 2003WFCA District XVII Coach of the Year.

Freund earned a Master’s Degree in Educational Policy and Leadership from Marquette University and has served as principal at Saint Joseph High School since 1999. He married Lynn Laufenburg in 1981, and they have raised three children - Andrew, Daniel, and Bethany.