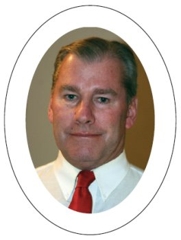 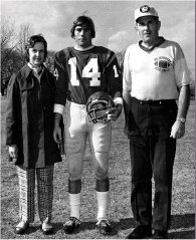 John Kolstad was a person “born to coach.” The son of Hall of Farner Howie "Chick" Kolstad (Eau Claire Regis/St. Norbert), John was raised in a family of educators.  John played three sports at Abbot Pennings High School under another Hall of Fame coach - Don LaViolette.  He then went on to St. Norbert College to play QB for his father. He lettered three years and was part of the 1974 squad that went 8-2 and ranked first in the state by Associated Press. John also competed in track and field as a pole vaulter (13'9) and served as team captain in 1974.

After graduating from St. Norbert in 1975, John was hired by West DePere and coached football with another Hall of Farner and longtime friend Bill Turnquist. Together they won 5 championships and went to the WIAA playoffs in 1981 and 1983. Both years they made it to the semifinals only to lose to the eventual state champion.  While at West DePere, John worked on and completed his Master's Degree from Northern Michigan University.

In 1987, tradition-rich Green Bay East named John Kolstad it’s new head football coach. East was a school that graced the names of Lambeau, Crowley, Tom Hearden, Gene Bray and others. At East John won 110 of 184 games and was 89-49 in Fox River Valley Conference appearances. In 19 years Kolstad had only 4 losing seasons and qualified for the WIAA playoffs ten times. The 1995 team made it to the semifinals of Division I only to lose to eventual state champion Sun Prairie. John also coached in the 1996 All-Star game as offensive coordinator for the North team.

John’s best memories are his players and family. He loved his players. He also had the opportunity to coach both of his sons - Ben and Andy while at East.