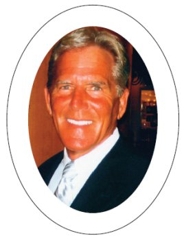 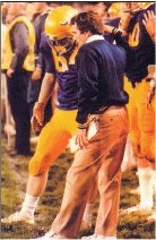 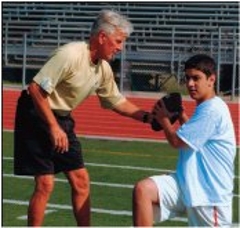 Jeff graduated from John Marshall High School in 1967, where he lettered in football, basketball, and baseball. Jeff was named First Team All-City Conference in football and baseball.

Jeff attended Ripon College where he played football, basketball, and baseball. He felt honored to have been elected captain in each sport. Jeff was selected First Team All-Midwest Conference in football as quarterback and baseball as shortstop. Jeff was selected to receive the prestigious Samuel Pickard Award as a senior at Ripon.  After receiving a Bachelor of Science Degree in Physical Education in 1971, he completed his Master's Degree in Curriculum and Instruction at UWM.

Jeff began his teaching and coaching career at Cudahy High School in 1971. He taught physical education and was an assistant coach in football and basketball. Jeff served as offensive coordinator under head coach, Jerry Bowe, from 1974-1985 with a record of 81-32. During that period, Cudahy won three conference championships, readling the State Division I semi-finals in 1981 and the Championship game in 1982.

In 1992 Jeff relinquished his head coaching position in order to spend more time with his family. Jeff continued to coach football as he joined the staff at Waukesha West High School when it opened in 1993. He is presently a varsity assistant football coach at Waukesha West under head coach, Steve Rux. The Waukesha West football team has qualified for the WIAA. State Playoffs eight times, winning the Division II State Championship in 2004.

Following the encouragement from a number of WFCA (Wisconsin Football Coaches Association) coaches, Jeff started the Jeff Trickey Quarterback Camps in 1988. The camp was developed to provide intense quarterback instruction, leadership skills, and teaching character through sports. Jeff and his staff of college  quarterbacks are committed in sharing the message for all campers to “accept the risk of leadership” as well as the responsibility of being a role model. In 2009 Jeff and his staff will conduct thirty quarterback development camps nationally, drawing campers from over forty states. Jeff was honored to have been the recipient of the 2002 Dave McClain Distinguished Service Award given by the WFCA Hall of Fame Committee.

As a motivational speaker, Jeff has had the opportunity to share his message of the “game plan for life,” “team building” and “strong character” with many groups, companies, and clinics throughout the country.

Jeff is very appreciative of his family and dear friends for their life-long support. Jeff also owes any success he has experienced to the gifted coaches and athletes he has worked with, for they provide the true rewards of his teaching/coaching profession.