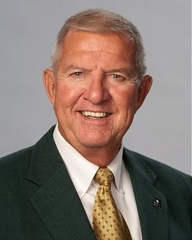 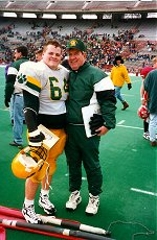 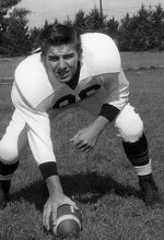 Coach Jim Allen was born in Escanaba, Michigan to Alice and Hubert Allen in May of 1940. He graduated from Escanaba Senior High School in 1958 earning two varsity letters as a center, line backer, and kicker. Jim also lettered in basketball for the Eskymos.

Service in the Marine Corps Reserve and United States Army interrupted his football participation until 1963 when as a “walk-on” during spring football Jim was awarded a partial scholarship at Michigan Technological University. Jim saw action on both sides of the ball as a center and defensive tackle. Jim earned two letters for the Huskies and was a member of the Northern Intercollegiate Conference Championship Team in 1963. In December 1965, Jim graduated with a degree in Civil Engineering.

During a successful project management career with James River Corporation, football once again entered Jim’s life. It was time to “give back” and it started with an offensive line position with the Ashwaubenon 7th Grade Team. Over the next six years, he became the offensive coordinator and Head Coach.

In 1990, Jim volunteered for Coach Ken Golomski’s Ashwaubenon Jaguar Varsity as an Offensive and Defensive Line assistant and then became a member of the staff as Special Teams Coordinator and Offensive and Defensive Line Coach. In 1993, the magical ride began for the Jaguars as they won seven Bay Conference Championships, two State Runner-up trophies and four State Championships.

While Coach Allen has thoroughly enjoyed coaching the strategy of football, he especially appreciated the privilege of having the opportunity to work with the individual young men incorporating life lessons. Using his demeanor, intelligence, and sense of humor, Coach Allen has been recognized as an excellent motivator, role model, disciplinarian, and mentor to the student athletes he has coached.

Over the years, Jim feels that it has been a privilege to have been associated with many great coaches. The opportunity to have these men as friends is truly a blessing. The culmination of his coaching career is being inducted into the WFCA Hall of Fame with another great coach and friend Coach Rich Bessert. Jim is extremely proud of this recognition and grateful to the WFCA for this honor.