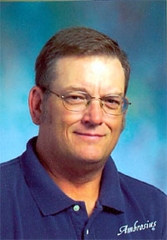 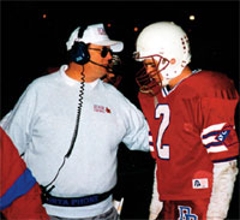 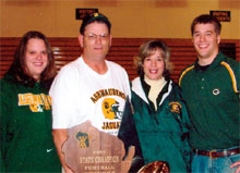 Rich will always be remembered for his trademark sideburns and for wearing his sunglasses, day or night, for coaching.  When asked why he always wore those sunglasses Rich simply replied, “The sun never sets on the cool!”

Rich was born in Green Bay, WI on March 23, 1951 to Cliff and June Bessert, the eldest of four children. He graduated from Ashwaubenon High School in 1969 where he lettered in football, wrestling and track and field. As a senior Rich was named Co-captain and MVP of the football team and Athlete of the Year.

Upon graduation, Rich continued his education and track career at UW- Stout. While experiencing success as a shot putter, he could not deny his love for football and joined the Blue Devils on the gridiron during his junior year.

Rich loved teaching and coaching football, but it was the relationships that he formed with both his students and athletes that he truly cherished.

Rich was always quick to give thanks and recognition to the communities in which he coached,  his fellow coaches, his players and their parents and especially his family for all of their love and support.  He and his wife, Kay, who he affectionately referred to as his “First Lady,” were married in 1979.  Together they raised their two wonderful children, Andrea and Steve.  Andrea was Rich’s number one fan and backer.  Rich had the great fortune of coaching Steve in high school for football. Rich’s joy of becoming the Head Football Coach at Ashwaubenon High School was only compounded when Steve agreed to join Rich as an assistant coach.  Rich proudly proclaimed, “Just think, I’ll be coaching on Friday nights, looking down the sidelines and seeing Steve coaching with me.  Cool!”

The Bessert family is extremely grateful to the WFCA for this humbling honor.