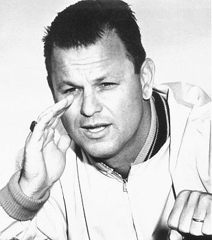 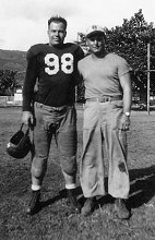 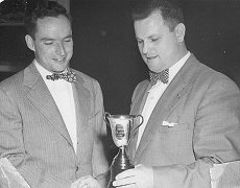 Cibik continued playing football. His first collegiate year in 1935 was at Milwaukee State Teachers College, he won All State honors that year. Then on to the University of Wisconsin, Madison, playing halfback for 3 years for Harry Stuldreher; one of the legendary “Four Horseman” of Note Dame. In 1939, his senior year, and with his 4 years of eligibility used up, Coach Cibik volunteered as the backfield coach for Milton College that went on to win the Tri-State Conference that year.

Coach Cibik arrived at Cedarburg in 1942 after serving 2 years as the athletic Director at Fennimore HS. His 11 years at Cedarburg were interrupted with a 18 month break during WWII serving as recreation director for the US Marines stationed in Pearl Harbor (1944-1946).

Coached 11 seasons at Cedarburg HS (1942-1954). His Cedarburg HS coaching career delivered 7 championships! Coach Cibik’s last 75 games at Cedarburg had only 7 losses and from 1946-1949 had 30 straight games without a loss, a state record at the time! Coach Cibik’s life was cut short in 1954 at the young age of 38 due to cancer. His outstanding coaching record, his dedication to his players and students alike and his devotion to his family have been recorded in print and recanted in countless stories from past players and community leaders.

His fellow coaches described Cibik as a “football genius”. The strength of his formations was anchored in the single wing system. It’s been written that he was an “institution in Cedarburg”! “He had a profound influence on the lives of the local youth.” To his players he was their idol. Building the character of the community’s youth was his passion. Sosuccessful were his teams that the city merchants lobbied and were successful in changing the Friday night games to Saturday because “nobody shopped the stores” when the Cedarburg Bulldogs played home games.