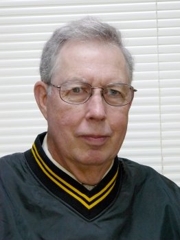 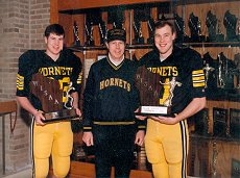 Ron Hahm was born on a farm in Brookfield, Wisconsin on May 2, 1943 to David and Catherine Hahm. At the age of six the family moved to a new farm location in Ixonia, Wisconsin where he spent his nurturing years. He attended Oconomowoc High School for two years before transferring to Northwestern Preparatory School in Watertown, Wisconsin, graduating in 1962. He was captain of his football team and a first-team all-conference running back selection his senior year.

Hahm continued playing football at the collegiate level at Northwestern College in Watertown, Wisconsin. There he earned varsity letters all four years in football, basketball and baseball.

After graduating from college in 1966, Hahm was drafted into the US Army. He served his country with distinction and exemplary service, earning the Army Commendation medal. His service duty in the Berlin Brigade in Berlin, Germany consisted of private secretarial work for the Brigade troop commander and also acted as a liaison with the German community. While in Berlin, Hahm coached a basketball team of the Spandauer Wasserfreunde, the sport club to which he belonged.

Upon release from active duty in 1969, Hahm matriculated at Wisconsin Lutheran Seminary in Mequon, Wisconsin. In May of 1973, Hahm was assigned a call to serve Resurrection Ev. Lutheran Church in Virginia Beach, Virginia. He served the congregation for five years and then in May of 1978 he accepted a call to Northwestern Preparatory School to teach Latin, German and coach football. After three years as offensive coordinator, Hahm took over the program and became head coach. In addition to football, Hahm coached in the boys' and girls' basketball and track programs (head girls' basketball coach for four years). He has also served as an assistant and head coach for wrestling.

Hahm has coached the school's Junior Classical League team since 1997. His teams have won the first place qualitative trophy for seven of those years. Several of his students have won the sweepstakes award at the state level. A select number have competed at the national level and have placed in the top five.