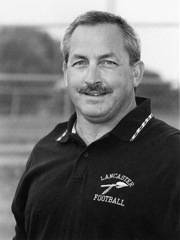 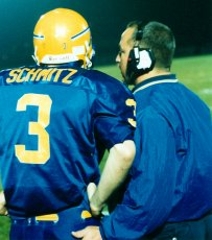 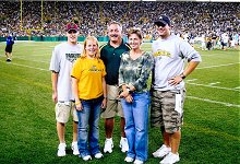 John was born in Wabasha, Minnesota on January 2, 1958 to Myron and Marlene Hoch. He attended Alma High School through his junior year and graduated from Durand High School in 1976. He participated in football, basketball, track and baseball, lettering fourteen times while earning numerous all conference awards. Two outstanding high school football coaches coached him; they were Lynn Iverson and Pete Adler.

After high school he continued playing football and baseball at the UW of River Falls. He lettered four years in football and two years in baseball. His senior year River Falls won the conference championship and qualified for the NAIA Playoffs. Later, John coached football as a graduate assistant at River Falls. He had the honor being a part of the program with head coach Mike Farley.

John began his teaching and coaching career at Lancaster, Wisconsin. He is a teacher of emotional-behaviorally challenged children, athletic director, and administrative assistant for the middle and high school. After serving one year as an assistant football coach he was named head football coach in 1982. While at Lancaster he was also assistant coach in baseball and track (one state championship).

One of John’s highlights in his career was when he was named Green Bay Packers High School Intern Coach in 2005. He had the honor of working with the Green Bay Packers for two weeks under Coach Mike Sherman. Coach Hoch was named Telegraph Herald Coach of the Year in 2005. Most recently he was elected WFCA President Elect in 2007-08 and President in 2009-10. John was named Scholastic Coach and Athletic Director “Coach of the Three Quarter Century” in 2007 for the State of Wisconsin.