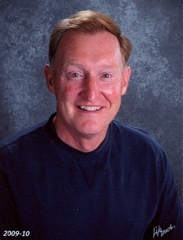 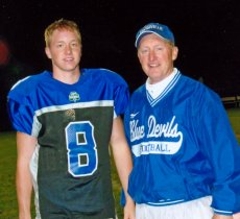 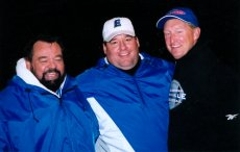 Randy was born in Darlington, Wisconsin on January 6, 1953 to Harry Jr. and Lorraine Keister. He graduated from Darlington High School in 1971 where he earned seven letters in football, basketball, and baseball. In his senior year he was selected All-Conference in football and baseball. While playing high school football Randy had the privilege and honor to be coached by D.J. Bertolini, a member of the WFCA Hall of Fame.

Randy went to the University of Wisconsin – Madison from 1971 to 1975. While attending college he was a member of the baseball team and he graduated with a Bachelor’s Degree in Elementary Education. In 1987, he received a Master of Science Degree in Counselor Education from that same university.

In January of 1976, Randy began his professional career as a teacher in the Evansville School District. His first football coaching position was at the freshman level in the fall of 1976. He continues as an assistant coach at Evansville High School at this time. For several years Randy also served as an assistant baseball coach.

The football staff that Randy began his career with includes four coaches that have gone on to become members of the Wisconsin Football Coaches Association Hall of Fame. Bob Berezowitz, Ron Grovesteen, Duane Updike, and John O’Connell all spent more than 35 years coaching at the high school and/or college levels. Their influence as teachers of the game, motivators, and successful people inspired Randy to continue in this profession.

During 34 years as an assistant coach Randy has worked with the freshman team (3 years), the junior varsity and varsity special teams (4 years), and the offensive line (7 years). He also served as defensive coordinator for 20 years. In that span of time the Blue Devils had 224 wins and 81 losses. There have been 9 conference championships, 15 second place finishes, and 17 playoff appearances. Randy was the Rock Valley Conference Assistant Coach of the Year in 2002 and has received 25 and 30 year WFCA service awards. He was the Wisconsin PTA Secondary Teacher of the Year for 1993-94. Randy is proud to have coached many All-Conference and All-District players, 7 Blue Devils who have been named All-State and 14 young men who have participated in the Wisconsin Shrine Bowl/WFCA All-Star Game. Last season two former offensive linemen were named All-Conference in the Wisconsin Intercollegiate Athletic Conference.

Randy is grateful for his family, the many young players he has coached throughout his career, and the support he has received while working in Evansville. Finally, he would like to thank the WFCA for this great honor.