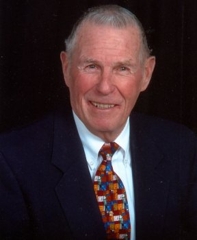 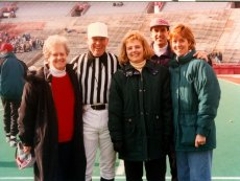 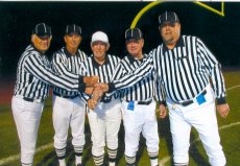 Dick was born in Milwaukee, Wisconsin, on June 10, 1933, to Carl and Viola Koch. He graduated from Nathan Hale High School in West Allis in 1952, where he played on the football, basketball, baseball and tennis teams.

After 56 years of running up and down football fields, blowing his whistle and untangling players covering some 1,800 games, Dick hung up his spikes in 2008. “Officiating was never a job for me; I did it for the love of the game,” he said. “I enjoyed every moment on the field and always encouraged players to strive to play to the best of their ability.”

Although he managed to escape serious harm to life and limb, there was at least one close call. Dick recalled, “It was during a Central States game. I got run over by the offensive and defensive players along the sidelines. Of course, they had lots of padding on, but I didn’t. It was the final play of the first half and I limped into the locker room with assorted shoulder, rib, hip and ankle injuries. The doctor taped my ankle and I went out for the rest of the game. What really hurt was when the doctor tore off the tape after the game. Ouch!”

Dick served in the military from May 1953 to May 1955, where he officiated football and basketball games for military teams. He married his high school sweetheart Marlene on Feb. 28, 1953, and they have been happily married for 57 years. Dick and Marlene have three children, Lynn, Lori and Mark, and six grandchildren.

A retired senior forestry supervisor for the West Allis Forestry Department, Dick has been involved in many service organizations, including the Settlers Club of Wisconsin, which supports the Ronald McDonald House at Milwaukee Children’s Hospital. He’s also an on-call blood donor and has given 160 pints-that’s 20 gallons-to people in need.