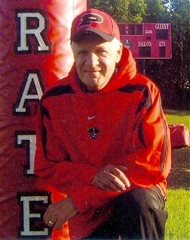 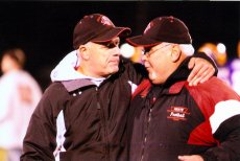 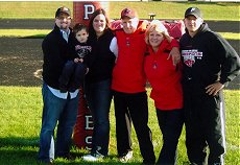 Mike was born in the Bay View Neighborhood of Milwaukee, Wisconsin on May 11, 1943. After graduating from St. Augustine Grade School, he entered St. Francis Seminary. He studied there for five years before leaving to finish college at the University of Wisconsin-Milwaukee. Lecher graduated from UWM with a degree in Education, majoring in Latin and minored in History.

In May of 1966, he signed a contract with Pewaukee Public Schools, where he remains today, and teaching in the Social Studies Department. In his first year at PHS he found no football position open. The next year a position opened, and the journey had begun. Mike held the freshmen position until 1970, when Coach Jim Kommers offered him a varsity job as backfield coach. After a couple of years, new Coach Jim Beaver made Lecher the defensive coordinator. With an excellent staff, Pewaukee won a conference championship in 1978, its first in over a decade. After Coach Beaver left, Mike Ryback became coach and led the Pirates for twenty-two years, leading them to many impressive victories. Under Ryback’s leadership, Lecher remained the Defensive Coordinator for the Pirates.

From 2000-2002, Lecher enjoyed some of his finest moments in coaching as his son Michael played on those teams. In 2002 Pewaukee won the Parkland Conference Championship during his son's senior season.

When new Pewaukee Head Coach Clay Iverson asked Lecher to return and serve as Defensive Coordinator, Mike made the move back to Pewaukee. In 2009 Pewaukee won its second consecutive Woodland Conference Championship, the first time in school history.

Mike has had the privilege of coaching many outstanding young men, including Stan Johnson who played in the CFL; Greg Lutzen went on to play at Northwestern University; and Chris McIntosh who starred at Wisconsin and was a first round draft choice of the Seattle Seahawks. Pirate standout J. J. Watt, is a current starter for the Wisconsin Badgers on the defensive line.