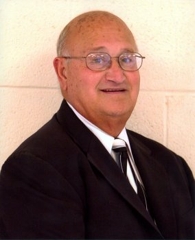 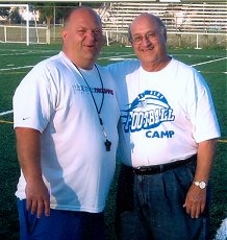 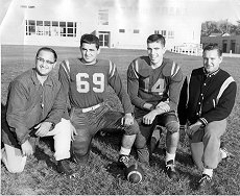 Frank was born in Kenosha, WI. On August 8, 1937 to Dominica and Joseph Matrise. He graduated from Kenosha St. Mary’s High School in 1955, where he lettered in football (4), basketball (2) and baseball (3). He was co-captain of his football team for 2 years while earning state honors.

Frank continued his career at Loras College in Dubuque, Iowa, as a member of the football team, where much of his success continued.

Upon graduation, in the fall of 1959, at St. Joseph High School, he began teaching History and Physical Education, as well as beginning his Coaching career. He began by coaching varsity football, as both defensive co-coordinator and offensive line coach, where he held the position for 19 years, (1959-1977), and become the head coach in 1978. He was the head Wrestling coach for 13 years' winning 6 consecutive WICAA State Championships from 1961 to 1966 compiling a record of 128-23-3. He also coached Varsity Golf, compiling a record of 44-72 and track for 4 years, coaching several state individual champions.

In 1966, Frank earned his Master’s Degree in Guidance, Counseling and Administration from the University of Wisconsin-Madison.

During his coaching career, he has helped many players attend and play college football.

One of which was Tom Regner, a consensus All-American at the University of Notre Dame. A starter at guard on the 1966 Co-National Championship Team and the No.1 draft pick of the Houston Oilers.

Frank credits the many great athletes and their commitment in bringing about the many accomplishments that were achieved.

Frank was selected as WISAA “Man of the Year” in 1996 and honored as an outstanding Football coach by the Kenosha Mount Carmel Men's Club and also for his dedication to all student athletes by the Holy Rosary Holy Name Society in 2005.

Frank is very appreciative of his family and dear friends for their lifelong help and support. He also owes a great debt of gratitude to all the gifted coaches and athletes he worked with, because they provided the many rewards from his teaching/coaching and Athletic Director Careers.