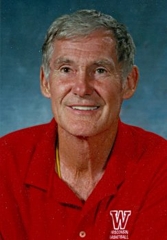 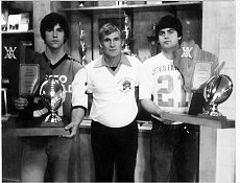 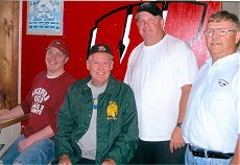 Harold earned his degree in Physical Education and History and spent the next 50 years coaching football and basketball. The first 7 years he coached in Minnesota winning conference championships in Osakis and Dassel in football. Harold them moved to Wisconsin and spent 27 years coaching football and basketball at Osseo- Fairchild, Durand and Chippewa Falls McDonnell at the high school level.

At Osseo-Fairchild Harold served as an assistant football coach/offensive coordinator for 28 years, while their Osseo-Fairchild racked up 15 conference championships with 5 state appearances. They brought home 3 state championships and 2 runner-up trophies during this time. In 1985 Harold was assistant coach under Duane Matye in the Shrine All-Star Football game.

From 1991-1995 Hal was an assistant football coach at both McDonnell and Augusta. He then returned to Osseo-Fairchild football in 1996. Harold has been calling plays in the booth from 1996 until the present. During that time he has been a part of two more state championships, one in 1996 and another in 2000.

Harold was head basketball coach for 49 years. During his tenure he amassed a record of 675 wins, 13 conferences titles, 8 regional titles, 3 sectional titles and a State Championship.

His philosophy is that in the scheme of sports and life it’s all about “Teamwork.”

Coach believes that if you can get players to committee to working together for one cause you will accomplish great things. Teamwork carries over into your everyday life and it will make you a more responsible person.

After spending a half a century coaching there are countless lives that have been positively influenced by Coach Mulhern’s talents.

Through his years of coaching football, basketball, baseball and track, his family including Evelyn, Mike, Pat, Shaun, Kelly, Erin, Bridget and Cynthia have supported him in every aspect of his career.