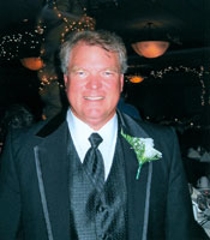 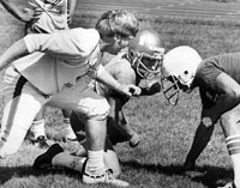 Patrick Prochnow, the son of Dorothy and Gordon Prochnow, graduated from Goodrich High School in Fond du Lac, where he was a three-sport athlete. As an athlete, he was part of numerous conference championships, including a state football title. He earned recognition at the conference and state level in football and track and continued his education and athletics in the UW system.

Upon graduation, Coach Prochnow was hired by the Green Bay school district where he began his teaching and coaching career. He coaches both football and track and field at Preble High School; he began his coaching career in 1976 and eventually became the head coach of both sports.

As an assistant and head coach, only the second head football coach in Preble’s history, Coach Prochnow has earned 9 conference titles, 12 playoff berths, and reached the semifinal level four times. He has 169 wins in his career. Many of his players earned conference and state recognition. Of these, several players went on to compete successfully at the college and professional level. In addition, Coach Prochnow was proud to have been able to coach his son, Ryan, who earned state honors in two sports. Coach Prochnow credits the many dedicated coaches and student-athletes who assisted in bringing success to Preble.

Coach Prochnow has received many honors which include: The Red Smith and Bellin Health Awards for excellence in coaching, the All-American Coach Award for the National High School All-Stars in San Antonio, and the Green Bay Packer High School Coaches Award. He also has earned many conference, area, district, and region coach of the year awards in both football and track. Coach Prochnow has coached in 2 Shrine All-Star games.

Coach Prochnow was instrumental in improving the facilities at Preble through the formation of the Preble Quarterback Club and many support groups. Under his leadership, major accomplishments include a new football stadium and track, watered practice fields, football storage building, and fully furnished weight room.