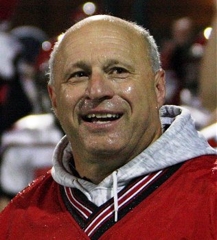 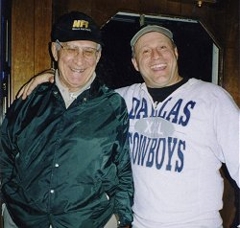 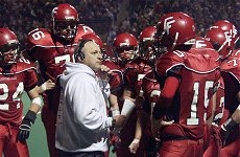 Charles (Chuck) was born in Ironwood, Michigan, on November 19, 1952, to Joseph and Violet Raykovich. His first experience with football was at a very young age helping his father, Joe, a 1992 WFCA Hall of Fame inductee, with “manager” duties. Chuck played organized football from 7th grade on, lettering all four years in high school, first for New Auburn and finally, Bloomer High School where he graduated in 1970.

Raykovich followed both of his parents to UW Superior, where he, like his father played on UW Superior’s football team lettering all four years.

Chuck's football coaching life began in 1974 at the age of 21, coaching the Crandon High School football team, where in 1980 he led the Cardinals to the “Northern Lakes conference championship. In 1982 he left Crandon to coach at UW-Stout under Bob Kamish. While at Stout, Chuck experienced his greatest thrill in college football when in the same week three players Chuck coached at Crandon were named offensive MVP’s at their respective schools; Jeff Wilson at UW-Eau Claire, Marty Sturzl at UW-Platteville, and Ed Space at UW-Stout. In 1984 Chuck returned to Crandon leading them to another Northern Lakes Conference Championship and first ever play-off appearance.

In 1986 took over the Chippewa Falls Cardinal football program. In 1987 winning the schools very first Big Rivers Conference Championship and first ever playoff berth. Chi-Hi won its second Big Rivers Championship the next year, 1988. In 1988 Chuck coached in the Shrine game under Roger Wistricill.  Conference championships were again won at Chippewa Falls in 1992, 1999, 2000, 2007 and 2008. Chippewa Falls has made 13 playoff appearances under Raykovich.  In 2006 Chuck was chosen as “Marshfield Clinic Coach of the Week” and in 2007 Raykovich was honored by being chosen as “Green Bay Packers Coach of the Week.”

In 1994 Raykovich was selected to be part of a group introducing American Football to the Far East. He was on the “American All-Stars” coaching staff which played an exhibition game verses the “Taipei Dragons” in Taipei Stadium.

While at Chippewa Falls High School Chuck has had the honor of coaching many great athletes, two being Chad Cascadden, who started for the Wisconsin Badgers and the New York Jets, and Randy Martin, a two time All-American and Harlan Hill finalist at St. Cloud University.