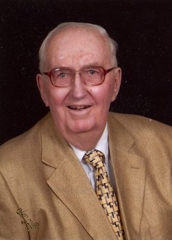 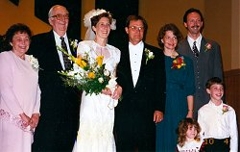 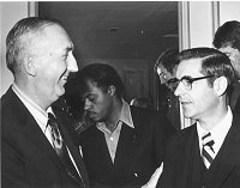 Bob was born in Oshkosh, Wisconsin on October 26, 1922 to Lester and Edna Stevenson.  He graduated from Oshkosh High School and attended Lawrence University where he was a member of the Viking basketball team before transferring to the University of Wisconsin.

Bob graduated from Madison in 1948 and began his professional career the following year when he took the position of Sports Editor at the Marshfield News Herald, where he remained for the next 36 years.  Bob’s dedication to his work and to sports was unsurpassed.  He missed only one day of work in his first 31 years on the job – which included half days on Saturday.

For decades, Bob was a tireless, one-man sports department.  Not only did he cover all sports for the two local high schools, Marshfield Senior High and Columbus, he covered many of the smaller area schools, including those in the Wisconsin Valley, Marawood, and Cloverbelt conferences.  This was during the pre-computer age when every event was covered with a pencil and note pad, typed up on a manual typewriter, and manually typeset.

Bob was known for his incredible memory and could recount statistics on almost any player he saw throughout his career.  He frequently provided other sports writers and authors with information for columns and books.

During the later years of his career Bob worked to establish a Scholar Athlete Awards banquet, honoring local athletes who excelled in academics.  After retirement, with the help of many friends and colleagues, Bob achieved a goal he had set many years before – the establishment of the Marshfield Senior High Athletic Hall of Fame.  Chartered in 2006, the Hall has inducted over 30 members.  Bob will be inducted in 2010.