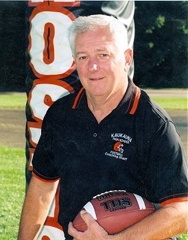 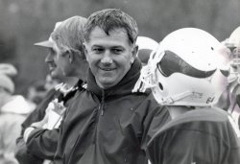 Robert R. Wurdinger Jr. (Bob) was born in Kaukauna, WI on June 29, 1943 to Robert and Rita Wurdinger. He graduated in 1962 from Kaukauna High School earning 8 letters in football and track. After graduation, Bob helped establish the Hollandtown Raiders youth football team and later the Kaukauna Raiders. During his 47 years coaching, “Coach Dinger” was the Raiders head coach for 24 years attaining a record of 418 wins, 16 losses and 3 ties. As assistant coach under Ron Roberts Sr., the Lawrence University “Vikings” earned a National playoff berth. He remained on the Vikings staff under Rich Agness until 1991. As assistant coach at Kaukauna High School for 20 years and under the leadership of coaches Bill Biekkola, Glen Hinkens, Keith Vanden Heuvel and Mark Jonas, the “Ghosts” earned a State Runner-Up trophy in 1992 and won the Fox Valley division championship in 1995.

Bob married Judy Summers in 1963 and are the proud parents of 4 daughters and 10 grandchildren: Lori and Ron McAllister (Morgan and Casie); Jodi and Steve Statz (Natasha, Victor, Joe and Warren); Staci and Steve Wanty (William and Sydni); and Penny and Mike Butts (Mikenna and Paige). Bob worked 44 years at Thilmany Pulp and Paper Company and retired in 2003.

Bob’s honors include the Red Smith Award in 1972, an induction into the Kaukauna Athletic Hall of Fame in 1987, the Red Smith Forgotten Man Award in 1991, and the Red Smith Fox Cities Sports Coaching Award in 2008. The Lawrence University Department of Athletics named an annual award the “Bob Wurdinger Athletic Service Award” and presented Coach Dinger with the first award in 2006.

Bob is grateful to the WFCA for selecting him for this life-time honor. He respects and appreciates learning from every coach and player who shared the field with him. To the many players he has coached he once said, "I've never met a young man who I did not like." Coaching football and believing in a greater community will always be his passion.