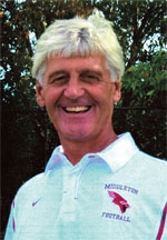 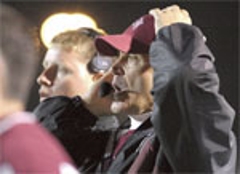 Tom attended the University of Iowa and graduated in 1974 with a degree in Physical Education.  He played freshman basketball and lettered and started on the football team for three years.

In the fall of 1974, Tom was hired to teach Elementary Physical Education in the Middleton-Cross Plains Area School District.  Leo Simms was instrumental in attracting Tom to this area and he joined Leo’s football staff that fall, coaching at the sophomore level.  He moved to the varsity squad the next season, becoming the defensive coordinator for Earl Lochner who had become the new head coach.

In 1982, Kurt Gundlach became the head coach.  In both ‘83 and ‘87 Middleton was the Division 2 Champion.  Tim Simon became the head coach in 2004.  Tom credits these coaches for giving him the opportunity to develop his defensive philosophy and for his success as an assistant coach.  Tom has also coached basketball, baseball and golf at Middleton high School.