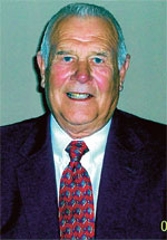 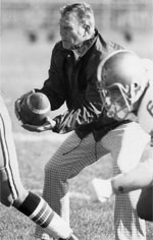 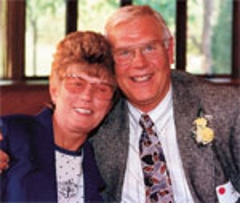 Robert Hessler was born in Eau Claire, Wisconsin on September 13th, 1931 to Romeo and Fern Hessler. He graduated from Eau Claire High School where he played football, basketball and ran track. Bob played guard on the 1950 basketball team that took second in the state. He competed in the state championship for track as a shot putter.

Bob continued to play football for the United States Marine Corp for two years in California. After being discharged from the Marines, he entered the University of Wisconsin - Eau Claire where he was a four-year starter at fullback. He earned all conference in 1955 and 1956. He was named Honorable Mention Little All American in 1956 as he led the Blugolds football team to the Wisconsin University State Championship. He went on as Captain of the Blugold football team in 1957. Bob held the Eau Claire University all-time season rushing record in football for 22 years, until it was broken in 1979.

Upon graduation from the University of Wisconsin- Eau Claire, Bob began his coaching career at Menomonee Falls High School in Menomonee Falls, Wisconsin. He coached there for 35 years. Bob was the head football coach for seven years with a record of28 wins, 26 losses and 5 ties. He became head assistant coach to Jim Jeskewitz at Menomonee Falls East High School in 1969 and continued in that role for the next 26 years. During that tenure they won 172 games, lost 82 and tied 4 and went on to win the Wisconsin State Championship in 1976 and took 2nd in 1985.

Bob was named District Coach of the Year in 1985, by the Federation of Wisconsin High School Coaches Association for outstanding service in the field of athletics. Bob has been inducted to the Hall of Fames at Eau Claire High School, Menomonee Falls High School and the University of Wisconsin-Eau Claire.

The most important part of coaching for Bob was not the win or loss column but the relationships with the other coaches and with the young people who he coached.