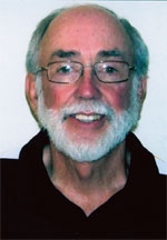 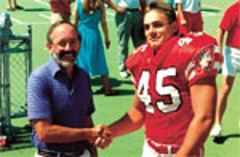 Richard Jones is very honored and humbled to be inducted into the Wisconsin High School Football Coaches Association Hall of Fame. He is a unique inductee in the fact that he never played the game at any level. Dick was the football manager at Lake Mills High School under Phil Schroeder. He picked up towels, washed uniforms, reported scores, ordered equipment, repaired wounded egos and locked up after practice. When the opportunity to coach arose at Waterloo High School, Dick knew what he was getting into.

Dick has given football a hard working, dedicated and loyal coach for 40 years. However, football has given a skinny kid with no athletic ability so much more in return. From the beginning, it gave him a chance to belong, a sense of accomplishment, taught him to be a leader, earn respect and to become an excellent coach and teacher. Because of his personal background, he had great empathy for the athletes who were not all-conference, but wanted to belong and have a positive experience. The two statistics he felt were most important were win/loss record, of course, and did he end the season with the same number of kids that started. Dick was very successful with both.

Coaching has also made Mr. Jones a much stronger and effective classroom teacher. He has been recipient of many state and local teaching awards along with being co-founder of YOST (Young and Old Stick Together), a very successful intergenerational program that also has been recognized at the state and national levels.

Coach Jones was proud of being involved in a program that has won nearly 70 percent of its games over 40 years. He coached in over 600 games on Monday and Friday nights, he was named Assistant Coach of the Year in 1995 and had the privilege to serve on the WHSFCA Board of Control for two terms. The privilege to work with fellow hall of famers Doug Miller and Jeff Otteson for the majority of those years is priceless.

Dick retired from teaching in 2006, but has coached for the past five years on a volunteer basis.  He presently serves on the Jefferson County Board of Supervisors, Avestar Credit Union Board of Directors and officiates UW track.