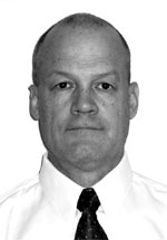 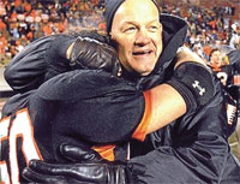 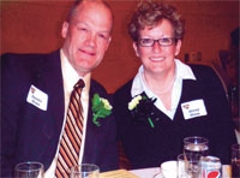 After graduating from UW-Oshkosh, Dennis began his coaching and teaching career at Highland High School, in Highland, Wisconsin. His coaching duties included head football coach and head girls basketball from 1977-1979.

Dennis moved back to Oshkosh in 1980 and was an assistant football coach at UW-Oshkosh for Hall of Fame Coach Dave Hochtritt.

In 1981 Dennis and his family moved to Wautoma, where he began a twenty-two year teaching and coaching career. Dennis won a conference championship in 1982, the first in twenty-two years at Wautoma. He went on to win three more Conference titles and a Division IV State Championship in 2008.

Dennis was WFCA District Coach of the Year in 1982 and 2008. He was an assistant coach in the 2009 WFCA All-Star Game. Dennis was recently awarded the Russ Young Leadership Award from UW-Oshkosh.

The biggest memory about coaching all these years has been the relationships he has had with his players and fellow coaches. It is very rewarding to Dennisto watch young boys grow and develop into good family men and responsible community members. A big thank you goes out to the players, coaches, and the WFCA for this great honor.