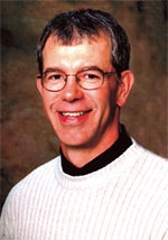 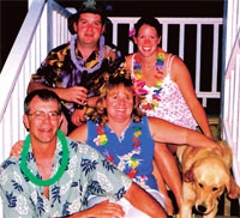 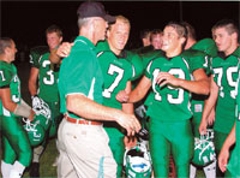 Born in Kenosha, WI, in 1957, to Dick and Patricia Moore, Jim moved to Rhinelander in 1964 and participated in football, wrestling, and track.  Following Mike Webster, the Wisconsin Badger and Pittsburgh Steeler great, at Rhinelander was an inspiration, so breaking Webster’s shot-put record is a fond memory.  In football, Jim earned a Vince Lombardi Award for being one of the state’s “outstanding lineman,” and the Hodags enjoyed back-to-back winning seasons as well as a 1974 Wisconsin Valley Conference Championship.

Jim later accepted a scholarship at UW-Madison and had the opportunity to play for John Jardine and Dave McClain.  He earned the center position as a sophomore, starting thirty-three consecutive games.  He also earned his family’s first college degree and was named, twice, to the All Big Ten Academic team.  As a senior, he was selected for the Blue Gray Classic All Star game in Alabama.  At Madison, Jim married his high school sweetheart Denise Ann, always his greatest supporter and most helpful assistant in all he did as a player and coach.

After college Jim still had a strong desire to play, needing four professional try-outs with teams in the Canadian Football League, the United States Football League, and the National Football League to get playing football out of his system.  During this time, Jim also assisted Mike Hahn, his first high school coaching mentor, in Sun Prairie.

Professional football behind him and seeking a head job, Jim found a position in the Wittenberg-Birnamwood School District in 1984.  At “WB” Jim worked with Gerry Nelson, learning his trademark Belly Option offense and the philosophy of always turning “negatives into positives.”  In the seventh season, the team won its first conference championship, later adding ten more conference championships and fourteen playoff appearances.  This culminated in 1997 with Wittenberg-Birnamwood winning its first football state championship, ending the year 14-0 with three runners over 1,000 yards.

In 2003, Denise and Jim moved back to Rhinelander to bring success to their hometown program.  Rhinelander has been a pleasurable challenge, and the team has notched signature wins over perennial powerhouses like Stevens Point and Marshfield.  Currently, Jim is working hard to get athletes in Rhinelander training, believing it the surest means to Rhinelander’s eventual tradition, Jim and Denise’s biggest goal.