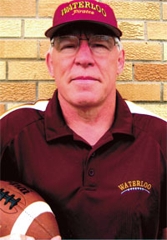 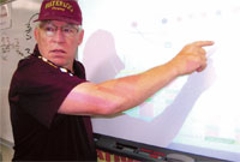 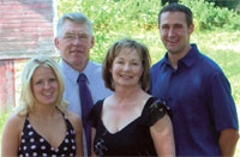 COACH OTTO OTTESON ...Teacher, mentor, friend . . . these are some of the roles of a great football coach. Otto has been an outstanding influence to thousands of Waterloo High School students of football, wrestling, track and math.  The son of Jean and Otto C. Otteson, Otto was born on May 18,1952, and raised on a dairy and tobacco farm in Cottage Grove, Wisconsin with 6 brothers and sisters.

He graduated from Deerfield (WI) High School in 1970, where he lettered in football, wrestling, and baseball.  He earned numerous All-Conference & All-State awards, and was elected captain in all three sports his Junior and Senior years.   After high school, Otto received his BS in  Mathematics/Secondary Education  at the University of Wisconsin-La Crosse in 1974, and earned his MA in Curriculum Development  from Olivet University in 2002.

Coach Otteson's coaching career began at Waterloo High School in 1975. Otto started as a middle school football coach, advanced to Freshman football coach, then to varsity assistant football coach as the defensive coordinator (from 1982-2010). He helped coach the Waterloo Pirate Football teams to a record of 219-90.

Otto would like to thank the WFCA, his fellow football coaches, his football players, and the great fans in Waterloo over the years, for making football coaching so rewarding.