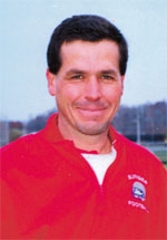 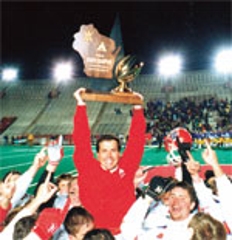 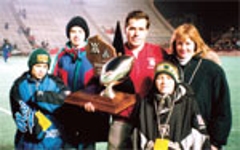 He attended UW La Crosse, graduating in 1980 and in 1988 he received his Master’s degree from UW Stevens Point.

Over his 16 years as head coach, Fred posted a 103 – 62 record, won two conference championships, made the playoffs 11 times with 10 of them in his last ten years, and was named the District XX Coach of the Year in 1997. He was an assistant coach to the 2001 All-Star game and the head coach for the 2005 All-Star game. He coached his 1997 team to State Runner-Up, and highlighted his coaching career with a Division III State Championship in 1998.

In 1990 Fred co-founded a scholarship golf outing. The outing has raised over $275,000 with over 440 student athletes from Slinger High School receiving scholarships to date.

Fred is very grateful to the WFCA for this honor, and he would like to thank the many fans, players, co-workers, and coaches (especially Coach Kiesow) that made this possible. Big thanks also to his closest fans: his eleven brothers and sisters, with special thanks to his parents, Larry and Rose. Last and most definitely not least, he would like to thank his boys for their unending support, and his wife – for without her endless love and caring this would not have happened. Thank you all very much!