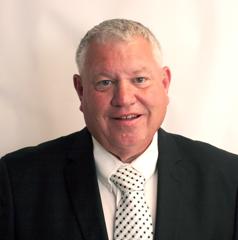 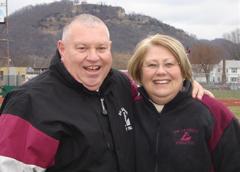 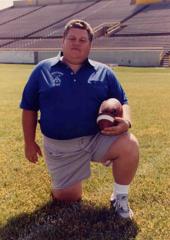 Michael was born in New Richmond, Wisconsin, on January 18, 1951 to Milo and Betty Anderson. He graduated from Mondovi High School in 1969 where he competed in football, wrestling and baseball. His football and baseball coach was his father, Milo “Mike” Anderson. Milo is a member of the Hall of Fame Class 1995. Anderson continued his involvement in football at the University of Wisconsin-Eau Claire under Head Coach Link Walker, Hall of Fame class of 1999.

Upon graduation in 1973 with a BS in Broad Field Social Sciences, Mike began his teaching and coaching career at Menomonie High School under the tutelage of Bob Bundy. Besides coaching football at Menomonie, Mike served as an assistant coach in wrestling and track/field.

In 1981, he moved to La Crosse Central High School as a social studies teacher and an assistant coach in football, wrestling and track/field. Anderson became Head Football Coach of the Red Raiders in 1987. The next eight seasons produced 5 conference championships along with 5 WIAA playoff appearances including 2 D-1 state semi-final games. From 1989 thru 1993, the Red Raiders compiled a 24-1-0 record in the Mississippi Valley Conference. Anderson was named the WFCA District Coach of the Year in 1989, 1992, and 1993; Coulee Region Football Coach of the Year in 1990; and named an assistant coach for the 1990 WFCA All-Star game.

Mike joined Hall of Fame Coach (class of 1998) Roger Harring’s staff at the University of Wisconsin La Crosse in 1995. The Eagles won their 3rd National Championship with a 14-0 record in his first season at UW-La Crosse. Over the next 16 seasons the Eagles won six conference championships and appeared in the NCAA D3 playoffs 7 times. In 2004, Anderson was honored by the WIAC as the conference Assistant Coach of the Year recipient. Three members of that UW-L 1995 staff have been inducted into the WFCA Hall of Fame: Head Coach, Roger Harring, Roland Christiansen, and Barry Schockmel. Anderson becomes the university’s 4th honoree.

Mike has actively supported the game of football by serving as a WFCA district representative from 1988-1994, President of the Coulee Region Football Coaches Association from 1987-1994, and presently serving on the American Football Coaches Association National Assistant Coaches Committee for the Wisconsin Intercollegiate Athletic Conference. He has worked numerous football camps in Wisconsin. He has worked over 10 years at the All Alaska Football Camp held in Palmer, Alaska. Also, Mike has spoken at various football clinics on topics related to offensive line play.