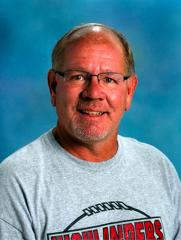 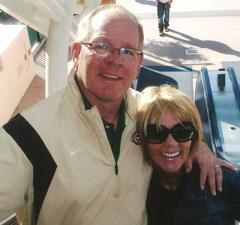 Dave graduated from Milwaukee Hamilton High School in 1972 playing football for WFCA Hall of Fame Coach Rudy Royten.  He attended and graduated from UW-La Crosse in 1976 playing and coaching for Hall of Fame Coach, Roger Haring.  His first high school football coaching came at Germantown HS where he coached freshman ‘B’ football for Hall of Famer Phil Datka.  Shortly afterwards Dave started teaching and coaching at Homestead HS in Mequon Wisconsin. In 1978 Dave was hired to teach mathematics at Homestead.

In 33 years teaching at Homestead, Dave taught everything from pre-algebra to pre-calculus.  His favorite class was always algebra 1 featuring ninth grade students new to high school.  At Homestead, Hall of Fame Coach John Brodie hired him as an assistant freshman coach in 1979 and as a varsity assistant in 1982.  In 1989, Coach Keel was hired to become only the fifth head football coach in Homestead history.

In the past 23 years the Homestead Highlanders have compiled a 204-57 record on the gridiron with 16 North Shore Conference championships, seventeen playoff appearances, 3 State Championships (1999, 2006, 2008), four semi-final appearances (2001, 2002, 2003, 2005) and one state runner-up (2007).  Since 1999, Homestead has achieved a special 144-17 (89%) record on the field.  Homestead’s phenomenal success can be attributed to an incredible coaching staff, special student-athletes and a community committed to success! Being the steward of these at Homestead has truly been a blessing!
In addition, Coach Keel has been the head coach of the Girl’s Softball program at Homestead for 28 years.  Homestead Softball has a 466-157 record with 13 conference championships, 13 state championship appearances and three State
Runner-up seasons.  Again, a tremendous number of talented athletes and assistant coaches have been instrumental to Homestead Softball’s overall success.