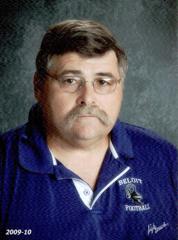 Mark graduated from Beloit Memorial High School in 1970 and continued to play football at the collegiate level at the University of Wisconsin – Stevens Point.

In 1979, Mark returned to his hometown accepting position at Beloit Memorial High School. Over the next few years, he went from coaching the freshman to becoming the Offensive Coordinator on the Varsity team for Head Coach John Heineke and later the Defensive Coordinator.

After the retirement of John Heineke, Mark was named the Head Coach for the Purple Knights and was selected the Big 8 Coach of the year for the 1998-99 season. Mark served in the high school coaching ranks for 35 years and as a coach at Beloit Memorial High School coached 3 conference champions and 13 playoff teams. Mark has served as the Defensive Line Coach at Beloit College in Beloit, Wisconsin, for the past two seasons.