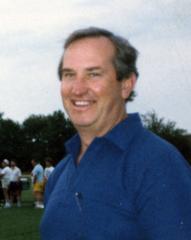 He was born in Mansfield, Ohio and attended Mansfield Senior High graduating in June of 1958

In the fall of 1964 he started a 33-year career teaching and coaching in the White Fish Bay School system. He coached all 33 years as a varsity football coach, first with Marsh Rieboldt and then with Bob Albrightson.  In 1986 he was appointed head coach. In 11 years as head coach, his teams won three Northshore Conference championships and were runner-ups twice.

Dick was named Northshore Conference Coach or the Year three.