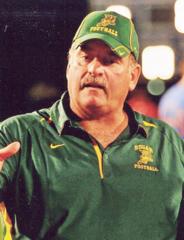 David graduated from Wautoma High School in 1972 and continued playing football at the collegiate level at the University of Eau Claire. He played for the Blugolds for four years and was selected captain and most valuable in 1975.

In 1979 David moved to Edgar Wisconsin where he began his high school coaching career. In 1982 he moved up as a varsity assistant coaching the offensive and defensive line to the current date. At Edgar, David coached on 19 conference championships teams, 15 semifinal four teams, four state runner-up teams and six state champion teams. Edgar has never had a losing season since 1979 and has compiled over 300 wins during that time period.