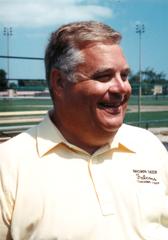 George Blanchard graduated from Pius XI High School in 1960, where he played football and was First Team All-State.

Upon graduation from UW-Oshkosh, Blanchard began a 32-year high school head football-coaching career. From 1966 through 1971, he was the head coach at Algoma High School in Algoma, WI. From there, he went on to coach at Brown Deer High School from 1972 until his retirement in 1998. His teams won the Braveland Conference Championship in 1975 and Parkland Conference Championships in 1986 and 1991. Blanchard was also Brown Deer Athletic Director from 1982 until his retirement in 1998.