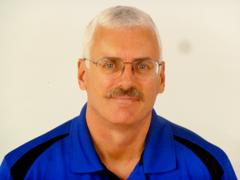 In 1957, Pat was born in Janesville, Wisconsin. He received a BS from UW Stevens Point and his Master’s Degree from UW Platteville.

Pat started his teaching and coaching career at Seneca High School in 1980. He would be an assistant coach for 14 years and head coach for 17 seasons.  After six years as an assistant coach he became the head coach in 1986.  After his first three years, his record was 5 wins and 22 losses. Starting in 1989 his teams had 94 wins and 46 losses, 11 playoff appearances and 5 Conference Championships. He was the WFCA District XV Coach of the Year in 1994, and five time Ridge and Valley Head Coach of the Year.