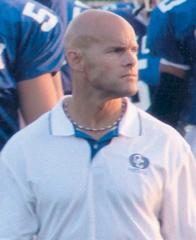 Joe Koch graduated from Catholic Memorial in 1977 and earned his BS from the University of Arizona.

In 1989 Koch became the Head Coach at Dominican HS; a program that did not have a winning season in 33 years. He and his assistants, Tim Lindemann and Chris Longtine, led Dominican to one State Championship, and one State Semi-finalist.

In 2007 Joe became the OC at Catholic Memorial under HOF Coach Bill Young and then 2009 accepted the challenge to turn around his third program at Pius XI High School.  In only his second year Joe led Pius to the playoffs.

Since 2011, Koch has been coaching at Brookfield Central as the OC. In 19 years as Head Coach, his teams had 145 Wins and just 60 losses.