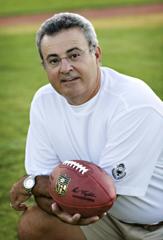 Gary Zauner
In 1968, Gary graduated from Milwaukee Hamilton High School as a multi-sport athlete lettering in football, basketball and baseball.

Zauner continued his athletic career at the University of Wisconsin - La Crosse as a punter and kicker for the football team.

Zauner started his coaching career in the Milwaukee area.

In 1981, Zauner was hired as the first full-time NCAA Special Teams Coach at San Diego State University, paving the way for young coaches across the nation.

After spending two years at the University of New Mexico, Zauner was hired by Legendary HOF Coach George Allen in 1990 to handle special teams and tutor kicking specialists at Long Beach State.

The UW-River Falls Kicking Camp was the nation's first kicking camp. Zauner was associated with this kicking camp for 30 plus years.

In the 80s and 90’s Zauner was hired as a kicking consultant by NFL head coaches; Dick Vermeil, Mike Ditka, Marty Schottenheimer and George Seifert.

Zauner formally moved into the NFL ranks joining the Minnesota Vikings as the special teams coordinator in 1994 under head coach Dennis Green. In 2002, Zauner joined the Baltimore Ravens under head coach Brian Billick and then finished his career with the Arizona Cardinals in 2006.

In 2008 Zauner returned to the private sector as a kicking coach and consultant.

To date Zauner has had the opportunity and privilege of working with over 90 NFL and 22 Pro Bowl specialists.