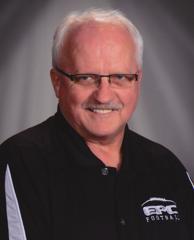 In 1977, while attending UW-Stout he began his coaching career.  He joined the staff of his mentors, Head Coach Bob Thomas, HOF Class of 1998, Larry Kreibich, Larry Hoolihan, and Keith Larson, replacing long time assistant coach Bill Howard.  The Cardinals went 12-0 in 1978 winning the Division 5 State Championship. He finished his career in Spring Valley after the 1979 season.

In 1980, after graduating from UW-Stout he moved to North Bend, OR.  He began teaching and coaching at the junior high.  He soon moved up to the varsity level as an assistant coach under Howard Johnson.  They turned the program around from a 3-7 team to a 7-3 team from 1982-83, he became the offensive coordinator in 1984 and continued to fight for the Far West Conference titles and made the playoffs for the next six years.

In 1990, he moved his family back to Wisconsin taking the Tech. Ed. teaching job in Elmwood.  He became an assistant coach under Bruce Schmiling, taking over as Head Coach in 1998.  The Raiders have enjoyed 14 of 16 years in the playoffs, the last 12 consecutively. During this time, the Raiders won 2 conference championships and numerous runners up.   In 2012 Elmwood and Plum City, after being long time rivals, formed a coop-program, joined forces and became the EPC Wolves.  Through the 2012 season Jerry has recorded an 86-64 record and is still coaching in Elmwood/Plum City for the EPC Wolves

Jerry has been honored to coach in 3 All-Star games for the North.  2009 on Tom Chase’s staff, Head Coach in 2010, and on Chris Berghammer’s staff in 2013, when the North won its first game since the two division era began.