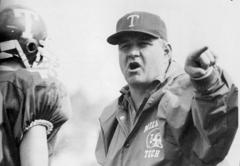 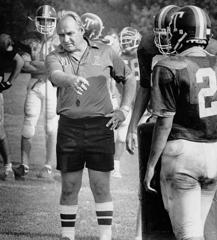 In 1967, Tom graduated from Boys’ Tech High School in Milwaukee, Wisconsin. A stellar athlete at Tech, Tom earned all-conference honors in both football and baseball and led the football team as team captain to a great season.

Tom continued his football career and brought his leadership skills to the University of Wisconsin-Whitewater. As team captain in 1970, He made all-conference and all district honors during his junior and senior years. Tom recognized his love for the game of football, along with the passion he had leading his teammates and friends and thus decided on a career in coaching. After graduation Tom served as an assistant line coach on the U.W. Whitewater freshmen team in 1971.

After that enlightening experience at U.W. Whitewater, Tom took his career back to Boy’s Tech where he worked for three years as the coach of the freshman and sophomore teams. In 1975 Tom was added to Jimmy Richardson’s varsity staff and soon became offensive coordinator under Frank Budzisz. Together in 1986, Tom and Frank led their Tech football team to the state championship game, the only Milwaukee City Conference team to do so. Together Tom and Frank achieved an impressive 91 wins and 23 losses.

In 1986, Tom became the Milwaukee Tech head coach. Building off of the success that he and his predecessor achieved, Tom coached his teams to 12 city conference championships in 19 years. During his tenure he won an impressive 33 straight games during the Milwaukee City Conference, a conference record that still stands to this day. His Milwaukee Tech teams have an impressive record with 135 wins and only 77 losses.

Tom’s great qualities of leadership served him well in baseball as well as football. Tom became a member of the Wisconsin Baseball Coaches Hall of Fame in 1993. His 1985 Tech team is the only City conference school to play and win a State championship. Tom posted a baseball record of 454 wins and 152 losses.