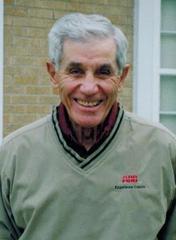 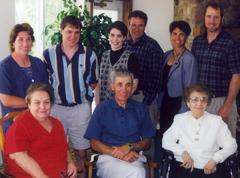 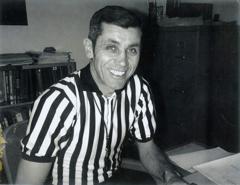 Pancho Palesse discovered sports as a young boy on the playground in Milwaukee and he has been involved in sports every since.

He attended Rufus King High School where he played football, basketball, baseball, and ran track. He was offered a football scholarship to attend Marquette University in 1942. He played end on offense and defense. He also played basketball at Marquette. His college career was interrupted by WWII. Pancho served as a copilot on a B 17. He flew 23 missions in Europe. After his military service, he returned to Marquette to compete in football and basketball. He was drafted by the Detroit Lions in 1946, but did not pursue an NFL career. He married Dorothy Ann Schmus in 1946 and left Marquette for a career in purchasing. Pancho continued his athletic endeavors in the industrial and semi-pro leagues in Milwaukee.

Pancho's officiating career started when he was asked to referee in a recreational basketball league. He quickly moved on to the high school level. He officiated at the WlAAIWISAA state boy's basketball finals 10 times. He became a college official working in every college venue in the state of Wisconsin. He was a Big Ten official for 13 years and had the privilege of officiating in the NCAA tournament.

Pancho's officiating career expanded to football where he refereed at the high school, college, and semi-pro level. At their peak, the crew of Bill Carollo, Warren Cartier, Ken Kulick, Dave Nettesheim, and Pancho would officiate at 5 games each weekend. These men shared many wonderful memories and became lifelong friends.

After retiring from officiating in the 1980s, Pancho served as the official scorekeeper for the Milwaukee Brewers for 6 seasons. He participated in the Senior Olympics and Senior Softball for many years. At the age of 90, he continues to manage and coach senior softball at the local level.