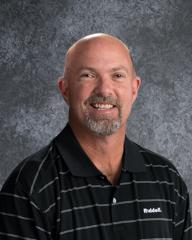 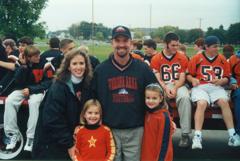 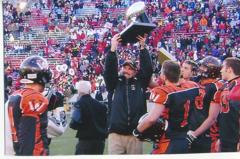 Born May 7, 1963 in Madison, Wisconsin, Dave is the youngest of seven children to Jim and Sue Richardson. Dave attended James Madison Memorial High School (’81) where he was a three sport varsity athlete (football, basketball, baseball). Dave has also had the great fortune of having six incredible role models, his older brothers and sisters, throughout his life.

Dave played college football at UW – Whitewater (’81-82), then transferred to UW – Madison and graduated with a B.S. in Physical Education, Health, and Coaching in 1987.

Dave began his coaching career at age 19, at Madison Holy Name Seminary in 1982, as a JV basketball coach. He began coaching football in 1983 at his alma mater, James Madison Memorial High School, as the head freshman and varsity assistant coach until 1985.

In the summer of 2000, Dave accepted teaching and coaching positions at Verona Area High School becoming a Physical Education and Health teacher, the strength/conditioning coordinator, and the head football coach. It was while at Verona, Dave was able to apply all of the valuable lessons he had learned from his previous experiences, to build a program that would withstand the test of time. Within the past 14 seasons at Verona, this included 8 Conference Championships, 4 State Quarter-final appearances, 4 undefeated regular seasons, 3 State Semi-Final appearances, and 1 State Championship Runner-up finish.