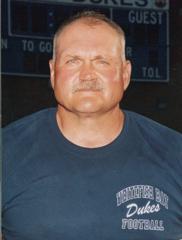 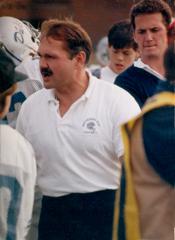 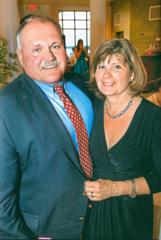 Born to George and Corrine Tietjen on February 12, 1954, Jim Tietjen graduated from Whitefish Bay High School in 1972. He attended the University of Wisconsin-Whitewater receiving a B.S. in Education with a minor in Coaching. Tietjen began his football coaching career under future WFCA Hall of Fame Coach Rudy Roytin in 1976 while student-teaching at Milwaukee Hamilton High School and stayed an additional season after graduating from Whitewater in 1977.  Hamilton had an 11-7 record in those two seasons.

In 1978, Tietjen was hired to teach at Mukwonago High School and coached with future WFCA Hall of Fame Coach Keith Hensler until 1984. He coached receivers and defensive backs, and created Mukwonago’s first strength and conditioning program.  In seven seasons with Tietjen’s assistance, Mukwonago went 47-28, won two conference championships and got to the Level III playoffs.

Tietjen accepted WFCA Hall of Fame Coach Bob Albrightson’s request to coach the defensive line at his alma mater, Whitefish Bay High School, in 1985. One season later, Albrightson stepped down and long time assistant and future WFCA Hall of Fame Coach Dick Baer became Head Coach and promoted Tietjen to Defensive Coordinator, which he held for 11 seasons. As Defensive Coordinator, Bay won conference championships in 1986, 1989 and 1993 and made Level I appearances in 1989 and 1993 and a Level II appearance in 1993.