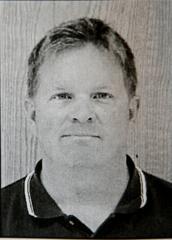 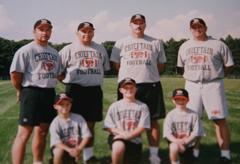 Dan was born in Neillsville, Wisconsin, on November 11, 1955, to Ray and Rosemary Waters. He attended Lincoln High School in Alma Center and graduated in 1974. At Lincoln he played football, basketball and baseball. Dan was coached and influenced by Dana Burns in football and Hall of Fame baseball coach Ralph Sobota who led them to state in 1972, 1973, and 1974.

After high school he continued to play football at UW River Falls and UW Stout where he played for Sten Pierce and Lyle Eidsness. He earned his bachelor’s degree in 1979 and master’s degree from Stout in 1981 in Guidance and Counseling.

Dan began his counseling and coaching career in the Antigo school district. He was an elementary counselor, freshmen football coach, freshmen girls’ basketball coach and weight room supervisor until 1984. Gordy Schofield, Dale Peterson, Ron Dillahunt and Dennis Schmidtke were on the High School staff at that time and all are WFCA Hall of Fame coaches. Dan was greatly influenced by them as well as his freshman assistants John Roberts and Glenn Bugni. He also partnered with freshman assistant Curt Hale to own and operate the Antigo Fitness Center during this time.

In 1985 Dan moved to the Osseo-Fairchild School District working as an elementary counselor, freshman football coach and weight room supervisor. He was named head baseball coach in 1987 and led O-F to 380 victories in 26 years. O-F also won 5 conference, 20 regional titles and 1 sectional championship. He was also named state coach of the year in 2006.

He was named defensive coordinator for the O-F varsity in 1990 and again was honored to work with 3 future hall of fame coaches. Duane Matye, Harold Mulhern and Warren Dahl were on this staff with Mulhern and Dahl assisting him when he was hired as head coach in 1994.