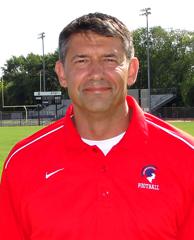 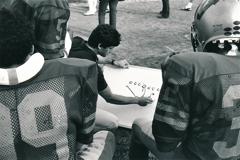 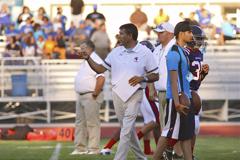 Jon grew up on the west side of Milwaukee where he attended St. Catherine’s Grade School and Washington High School. As a player at Washington, Jon was a part of the resurrection of the Washington Purgolders football program that also began the 30+ year head coaching career of his brother Greg (HOF ’03) at Washington, himself a former Purgolder.

After transferring from UW-River Falls to UW-Milwaukee, where he earned his B.S. in Education, Lehman began his coaching career with his brother and within two years he was named defensive coordinator, a role he served under Greg for 18 campaigns, before and after his departure from teaching and into the study (University of Dayton School of Law ’92) and practice of law.  While coaching at Washington, Jon designed and implemented what was known as the “Blackshirt Defense” – a culture of internal competition on defense that was revered and respected among the players year after year. Jon is very proud of the 106-54 record, conference championships, playoff appearances and numerous all-conference recognition for his players but, most importantly, he is proud to have contributed to the character development of the young men that became Purgolder football players.

The beginning of the youth football career of Jon’s son, Jonathan, in 2003 drew Lehman away from Washington and to his present home at Brookfield East.  Serving first as the head coach in the youth program, he was later hired on the varsity staff and then subsequently retained  on Tom Swittel’s (HOF ’09) first staff during the 2010 season, with the seniors that started with him in the Junior Spartans program. As a receivers and leadership technique coach during Coach Swittel’s tour at East, Lehman has been a part of five winning seasons and a 34-15 record that included a conference championship, and playoff appearances each year.