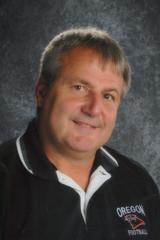 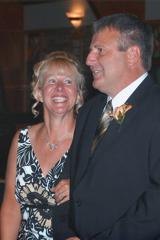 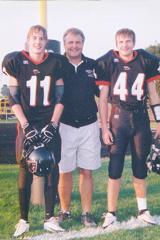 Bob was born on April 6, 1955 to Leonard and Audrey Prahl of Darian, Wisconsin.  He has two sisters Susan and Janet.  He graduated from Delavan-Darian High School in 1973 where he earned multiple varsity letters and awards in football, basketball, and baseball.  As captain of the basketball team, Bob helped lead Delavan-Darian High School to their first Southern Lakes Conferences Championship.

Following graduation from UW-Stout in 1977, Bob accepted a teaching and coaching contract at Oregon High School.  From 1977-1982, Bob was an assistant coach for JV and Varsity under Coach Cal Callaway (WFCA Hall of Fame Inductee).  He was also an assistant baseball coach for three years at Oregon.  In 1983, Bob was named the head football coach at Oregon High School. During his 27 years as head coach, his staff and teams compiled a 128-125 record. They also won the Badger Conference Championship in 1985 & 1990, and 8 times his teams qualified for WIAA playoffs.

Bob has been a member of the WFCA since 1977, being named as District Head Coach of the Year twice.  He was also named as ESPN’s Conference Coach in 2000.

While attending Delavan-Darian High School, Bob meet his wife Patti. They were married in 1979 and had 4 incredible sons, Christopher, Michael, Daniel and Bryan.  Coaching his four sons over a ten year period was the pinnacle of his coaching career.