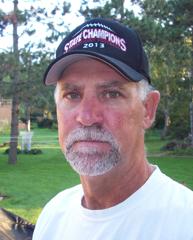 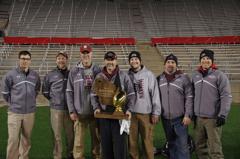 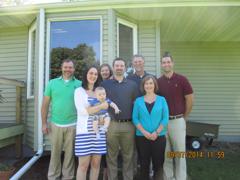 Bill was born on August 27, 1952 to Donald and June Vander Velden in Appleton, Wisconsin. He was part of a family of eleven children raised in Kimberly.

He graduated from Kimberly High School in 1970 where he participated in football, basketball and track & field. As a senior, the football Papermakers went undefeated. He also competed in the shot put at the State track & field meet. He was inducted into the Kimberly Athletic Hall of Fame in 1998.

Vander Velden went on to play football at the collegiate level at the University of Wisconsin - Platteville from 1970 to 1973 earning 4 varsity letters and All American honors his senior year. He was team captain, and earned Athlete of the Year selection by the University his senior year. The Milwaukee Journal selected Vander Velden as Most Valuable Player at UW-Platteville in 1973. Bill was inducted into the UW-Platteville Hall of Fame in 1994.
With a semester to go before graduation, he started his coaching career at UW-Platteville at the freshmen level and Monroe High School while student teaching. Upon graduation from U W –Platteville, Vander Velden taught technology education at Franklin High School in 1976, and then at Winneconne High School from 1977 to until his retirement in 2011. At Winneconne, Vander Velden was an assistant coach for 10 years before taking over the head coaching position in 1988 and continued for 23 years until his retirement. In his 23 years as head coach, he was named conference coach of the year twice and district coach of the year once. As head coach, his team captured two conference championships and earned 10 seasons of playoff competition. As assistant coach, the team won two additional conference championships and qualified for five playoffs. He had over 100 wins as Winneonne’s head coach.

Vander Velden retired in 2011 from Winneconne High as the Head coach and technology teacher, but continues today as an assistant coach at Winneconne. As assistant coach, the Winneconne Wolves captured the Division 4 State Championship in 2013. He continues to be a member of the Wisconsin Football Coaching Association since 1978.