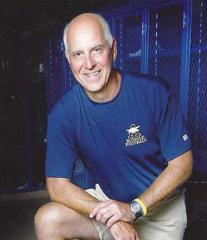 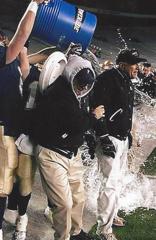 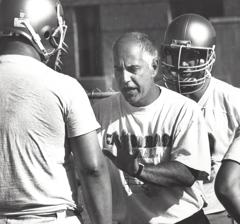 After graduating from UW-Madison in 1972, Dan was accepted at Marquette, intending to pursue law school after a one year break in order to earn tuition. He was reconsidering his options due to a change in his employer’s plans, when he spotted a small ad in the La Crosse Tribune. Aquinas needed a Social Studies Teacher and JV Football Coach. Dan applied, got the job in August 1972, planning to stay for a few years, but stayed on for 41 rewarding years until his retirement in 2013.

During his assistant coaching years, he was tutored and mentored by Hall of Fame inductees Dave Reinders, 1989, and Jack Nockels, 1990. In 1991, Dan was named Aquinas Head Football Coach surrounded by his family.

In 1993 Aquinas won its first state football championship followed by another in 1995. Aquinas joined Mississippi Valley Conference in 2000 and, in 2007; AHS Football earned the WIAA Division 5 State Championship.

In the off-season, Dan raced open wheel race cars at road racing courses throughout the Midwest. An avid skier, Dan and his wife, Jill, spent quality time with their boys at the local ski hill and annual ski trips to Colorado, California, or Utah. Joe (AHS ’99) graduated from the University of Minnesota in 2003. Alex (AHS ’05) attended St. Johns University where he played football for 4 years under legendary Coach John Gagliardi and graduated in 2009.

After 20 years of road racing, he traded his Formula V for a runabout and slip on the Mississippi. A lifelong do-it-yourselfer, Dan continues to use his construction skills since retirement as a self-employed contractor with Dan Coughlin Home Services, LLC.