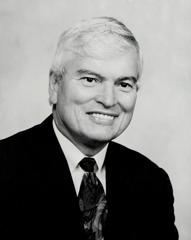 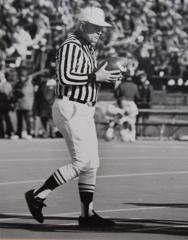 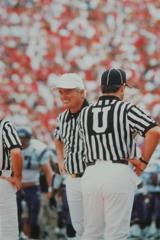 Jim Kemerling was born in Battle Creek, Michigan, on May 14, 1939, to Hubert (Baldy) and Norma Kemerling. He graduated from State High School in Kalamazoo, Michigan in 1957 where he played football, basketball, and baseball.

Kemerling attended Michigan State University on a baseball scholarship. He graduated with a BA in Economics and an MBA in Marketing. While at Michigan State, he met his wife, Jan Bjornseth. They were married on June 23, 1962. They have 3 children (Kristen, Karen, Mark) and 5 grandchildren (Eric, Alex, Morgan, Casey, and Madison). Jan passed away on December 20, 2007.

While in graduate school at Michigan State, Jim began his officiating career in both football and basketball. He took a leave of absence from officiating when he accepted a job transfer to New York City in 1966. The Kemerling family moved to Mosinee, Wisconsin in 1968 when he accepted a position with the Mosinee Paper Company where he served as President and CEO for several years. Since leaving Mosinee in 1988, he has been the CEO of several companies. He is currently the President and CEO of Riiser Energy in Wausau.

From a football officiating perspective, he began officiating high school games and advanced to the Wisconsin State University Conference in 1974. He was appointed to the Big Ten Conference staff in 1979 where he worked for 20 years. Retiring from the field in 1998 but continuing to be involved as a Technical Advisor/Observer. Kemerling became a Replay Official when that aspect was introduced to college football in 2004. He continues in that role today.

During his on field officiating career, he was assigned to work 8 Bowl games. Those included 2 Rose Bowls, a Sugar Bowl, and 2 Gator Bowls. As a Replay Official, Kemerling has worked 4 Bowls (Sun, Cotton, Orange, Liberty), and the initial Big Ten Championship game in 2011. Additionally, he served as the Assistance Communicator in the 2010 National Championship.